Webster, Massachusetts – “A congregation does not really know how much it will miss its Carillon system until it is gone,” notes Norman L. Jacques, President of Vector Associates of Webster, Massachusetts. The Carillon system of St. Joseph’s Church was destroyed in the fall of 1996 when lightning struck one of the two steeples. The power rack was rendered completely inoperable by the massive surge of electricity. When the horns in the steeples were inspected to see if any part of the remaining components could be salvaged, it was apparent they needed to be replaced as well. Corrosion and decay, caused by years of ravaging weather, dirt, dust, heat, cold, rain, wind, and bird droppings, left the horns in “less then high-fidelity working order,” quips Mr. Jacques. 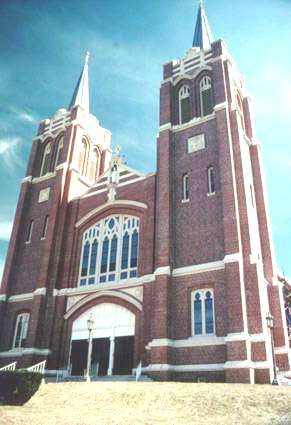 For several months the officials of the Church talked about replacing the system. But, the Pastor did not realize what kind of an impact the Carillon system had on the community and congregation until the issue was addressed to the congregation, from the pulpit. The congregation unanimously voiced their desire to replace the Carillon system as soon as possible. St. Joseph, a Catholic Church with a congregation of 1,200, is located in Webster, Massachusetts, approximately 60 miles west of Boston. St. Joseph Church was the first Polish-American Parish built in New England. First construction of St. Joseph Church began in 1887. The original St. Joseph was destroyed by fire, and was rebuilt in 1914. St. Joseph Church was recently rededicated after an extensive physical renovation, and Mr. Jacques notes, “the entire interior of the church has been refurbished to the tune of just fewer than one million dollars.” The renovation included a new marble floor, wall panels, alter, pulpit, and sanctuary. The ceiling has been completely redone with elaborate hand painted murals and the lighting system has been completely renovated with a computer controlled Colortrans Dimming system. “Since St. Joseph is the first Polish American Parish in New England, the significance of the event warranted a visit from Cardinal Sroka, the head of Economic Affairs for the Vatican.” Mr. Jacques, also a long time member of the congregation of St. Joseph, and resident of Webster, offered his services to replace the Carillon system. “The Carillon system really is a part of the community and the congregation,” states Mr. Jacques. “The congregation of St. Joseph has a median age that is much older then most. Therefore, a very large percentage of the congregation became very accustomed to hearing the Carillon system for many, many years. When the system was damaged beyond repair, it was as if the congregation had lost it’s voice. The outpouring of support to replace the system, and the unified morale to sponsor the project and get the job done quickly, was very moving.” The heart of St. Joseph’s new Carillon system is Verdin’s ‘Singing Tower’. According to Mr. Jacques, the fully programmable Singing Tower represents the state-of-the-art in digital sample technology for Carillon systems. All features, music and songs are pre-loaded and fully programmable, including six digitally recorded bell sounds, ranging from a 750 lb. bell to an awesome 4950 lb. bell. “The only way a Church is going to get more real then these sounds are to install the actual bells,” notes Mr. Jacques. Aside from the Peal & Toll function, there is a full set of Carillon and Harp sounds that are recorded as selections of music. The Singing Tower’s song library consists of 150 Hymns. 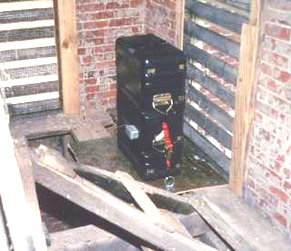 Mr. Jacques notes, “The sin of many contractors who install Carillon systems is to simply install the Verdin Singing Tower unit, a 70 volt amp and then feed the signal direct to a set of – for lack of a better term – ‘civil defense’ horns. Horns cannot reproduce the quality of the digital signal from the Singing Tower.” Mr. Jacques is quick to point out, “The lows and highs of the music, as well as all fidelity, is completely lost. The only thing that remains is just a tremendous blast of midrange. This seems to be an inherent problem with many Carillon systems, even these days, in spite of the technology that is out there. But, for many contractors who are ‘out-to-make-a-buck’, this horn system is fast, easy and profitable to install. It is the uneducated Church officials, and the congregation, who will ultimately pay a greater price by sacrificing a tremendous amount of fidelity, often times to save a very small amount of time and money.” Mr. Jacques asks, almost rhetorically, “What is the sense of installing a top-flight digital playback unit if the loudspeakers can only reproduce 400 Hz to 10 kHz? Where is the fidelity in that?” Vector’s priority was to install a high-quality sound system that would deliver awe-inspiring sound quality and stand-up to the elements. The one thing the congregation did not want was a loudspeaker system that could be susceptible to damage and decay like its predecessor. Mr. Jacques notes, “other weatherized sound systems compromise sound quality for their weatherization characteristics and ‘so-called’ durability. The steeples of St. Joseph’s are truly a hostile environment for high-powered, high-fidelity loudspeakers.” Mr. Jacques stresses, “I did not want to find myself in a position where I had to simply replace the former ‘civil defense’ horns, with new ‘civil defense’ horns.” As a member of the congregation, and the man who would ultimately have his autograph all over the installation, Mr. Jacques was determined to install the highest quality loudspeakers possible. Mr. Jacques did his research and discovered a relatively new speaker product, conveniently manufactured in Massachusetts. The claims the four year old company made about their loudspeakers was what Mr. Jacques remembered most. “These loudspeakers are designed to be extremely weather and abuse resistant, powerful, and very high-fidelity. Another interesting factor is these loudspeakers are built to military specifications.” Mr. Jacques contacted the company, Technomad LLP, of Boston, Massachusetts, and arranged for a demonstration of their products. After evaluating two Berlin 15/H model loudspeakers, Mr. Jacques determined he had found the loudspeakers for his job. Built into incredibly durable and almost indestructible, one-piece military specification, ATA III rated cabinets, a Technomad loudspeaker is designed to be impervious to water, sand, salt, temperature, mold, mildew, condensation, chemical, insect, UV radiation and other damage. “Even the bird droppings that had a terrible effect on the last set of loudspeakers,” jokes Mr. Jacques. The electronics contained therein are obviously protected by the cabinet, but in their own right, the components are also specifically designed to withstand the aforementioned elements. This assures the Technomad loudspeakers will perform reliably for many, many years. Customized bass and coaxial drivers start out as paper cones, but after Technomad’s proprietary three-step chemical process is applied, the driver material more resembles plastic then paper. Technomad’s unique chemical treatment assures the cones will not absorb, or be effected by, water or moisture. The driver material will maintain the proper balance and mass to provide accurate audio in all environments. Regardless if the climate is thick with humidity and rain, freezing cold or severely dry in blazing hot conditions, a Technomad loudspeaker will always deliver uniform and consistent sound quality. Technomad’s chemical process also extends the lifespan of the driver itself in extremely hot and dry conditions by preventing the cone material from drying out, weakening and cracking in short periods of time. Water, should it get on the drivers, simply sheds away, like water beading and running off a freshly waxed car. The Berlin loudspeaker’s WeatherTech grill breaks down and sheds away the most tenacious wind driven rain or water. Incredibly fine mesh and foam inner layers prevent insects, rain, sand and even the finest dust from entering the cabinet. Two Berlin loudspeakers were installed in St. Joseph’s left tower, facing south and east, and two Berlins were installed in the right tower, facing north and west. The Berlin loudspeakers are powered by two Peavey IA-400 amps with a Peavey SMR-6 preamp. Mr. Jacques notes, “The Berlins work very well at 200 Watts, even though they are rated at 450 Watts. I was originally concerned about having to give them more power, since they are essentially now operating at half the recommended power handling. Even in spite of the low power, I have a ton of headroom on the system.”

Mr. Jacques felt it necessary to add more flexibility to the new Carillon system based upon the high fidelity loudspeakers that were installed. A JVC 5-disc CD carousel player, along with a JVC Dual cassette deck was added to the system. The congregation is primarily Polish, and there is a substantial library of traditional Polish music on tape. Mr. Jacques notes, “A lot of traditional Polish music is not yet on CD. Therefore, the need for the JVC dual cassette deck. By facilitating the playback of this traditional music through the Carillon system, the congregation becomes more in touch with their Church, as well as their heritage.” An Atlas-Soundolier Panel Monitor Panel, model MVXA-195, reads out all cue sources. An Atlas-Soundolier ACKL-191 AC power Control Panel is located at the top of the rack and the entire system is secured in a 20U lockable Atlas-Soundolier rack. Mr. Jacques points out the CD player comes in handy for special events, such as weddings, holy days, such as Easter and Christmas, as well as somber events such as a service for a fallen police officer, fire fighter or other public servant. Vector recently tied in the house sound system into the Technomad Carillon system, thereby allowing overflow congregations to hear special events or holiday services. Mr. Jacques comments, “The rendition of ‘Amazing Grace’ on bagpipes, as performed by the Royal Scotch Guards, played through St. Joseph’s new Technomad Carillon system is incredibly moving. You would think the Royal Scotch Guards were playing this piece of music live in the parking lot. The harmonics are incredibly intricate and reproduction is as faithful as I have ever heard on any outdoor sound system.” The system is programmed for Angelus and Westminster Chimes to signal 3 time daily prayer at 6 am, noon and 6 p.m., not to mention six-bell peals, 15 minutes before each mass, followed by a number of hymns. There are 2 masses each day, during the weekdays and four masses each Saturday, and Sunday. Mr. Jacques states, “The Technomad Carillon system is used very regularly. In fact, it’s on 24 hours per day.” “Right after the system was installed, in the late spring of 1997; I wanted to surprise the congregation. After the first communion, when the congregation was starting to depart, I put ‘Pachel Bels’ Canon’ on the CD player. As soon as the first notes came through the steeple loudspeakers, everyone stopped, spun around and stared at the towers, mouths agape, in awe. I did not expect the power of the system and the music would have such a dramatic effect on the congregation and community. I live three and a half miles away, and on a calm night I can hear the bells and music loud and clear. So can every other member of the congregation within that range.”