You might be surprised to learn that one product that is frequently out of sight but is in our ears, is made right in the heart of Western Massachusetts.  Technomad, the manufacturer of the world’s best outdoor PA systems, makes all of its loudspeaker lines in Deerfield, MA.  Not only are they made locally, but they are made sustainably.  Technomad harnesses the heat from the sun to mold the variety of speakers that they offer.

First to develop truly weatherproof, military-grade, full-range audio systems in the 1990s, Technomad speakers are currently used by notable government entities, sports stadiums, and popular theme parks.  Technomad offers American made innovation that is exported around the globe.  These US made loudspeakers and PA systems can be found in Hong Kong, Singapore, Germany, the United Kingdom, Brazil, Latin America, and Ethiopia to name just a few of the installed locations.

Available in 14 colors to suit most any environment, the loudspeakers are also rugged and weatherproof.  Boasting audio clarity that Technomad customers require, the exceptional loudspeakers are made from a unique flight case manufacturing technology called roto-molding that was developed and first put into service in 1954.  The roto-molding process produces a very lightweight, incredibly durable and almost indestructible, one-piece military specification, ATA rated shell. This shell is impervious to water, sand, salt, temperature, mold, mildew, condensation, chemicals, insects, UV radiation, acids and other damage. 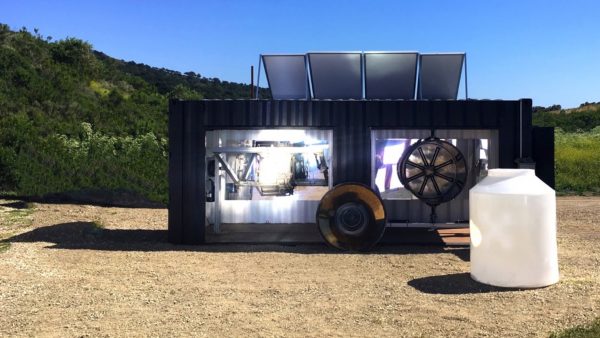 The loudspeakers are often accompanied by the patented waterproof PowerChiton amplifier, an entirely sealed, high power, networkable amplifier that can be installed anywhere.  The coupling of the ruggedness, sustainability and audio-quality make these systems ideal for public areas like towns, theme parks and stadiums as well as in military installations.

For those customers in need of a more portable solution, the company invented the DragonFly and FireFly portable weatherproof battery powered PA systems that offer unmatched power and fidelity in a light compact package that is also fully weatherproof.

Another innovation from Technomad that is a perfect pairing with their loudspeakers is the Schedulon media player.  Initially created for government and military clients, now all of the company’s customers can have access to automatic playback from an internal clock, a built-in web-server for remote control operation and configuration, and a quick access knob for emergency use. The Schedulon has many practical applications by customers, including use in hospitals for automatic messaging and lullabies, used by townships for ambient music, sounds and announcements, and remote park systems for public safety announcements.

Technomad is so confident in its cabinets (and after 43 years of active military service and subsequent military specification approvals, one would assume so), it backs them with a ten-year unconditional warranty.