The site featured a number of ways for revelers to experience a summer oasis within an urban backdrop. Visitors could socialize, sunbathe, wade in pools, and walk through a spray of mist while listening to live musicians and DJs pumping out progressive music through Technomad loudspeakers. Technomad’s flagship Berlin 15 loudspeaker, a high power two-way full-range cabinet, was used along with two Technomad Chicago 15 subwoofers to provide the bulk of the sound for the summer oasis installation.

Technomad’s two-way, full-range, coaxial Noho C loudspeaker was used for presentations for “Bed of Sound” by a number of noted artists, including Laurie Anderson, Ryuichi Sakomoto, Muhal Richard and Sonic Youth. The Noho was also incorporated into a historical work by Walter Murch which featured effects tracks from the feature Apocalypse Now. 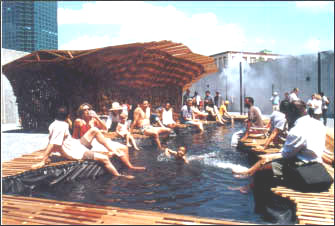 The Technomad Noho C contains a coaxial 12″ low frequency driver and 1″ compression driver providing unparalleled musicality and voice intelligibility. The Berlin 15 is equipped with a 2″ high frequency compression driver and a 15″ low frequency driver. Like all of the Technomad loudspeakers, the Noho, Berlin and Chicago are fully weatherproof due to their three-layer stainless steel WeatherTech grill, military-specification rotationally molded cabinets and self-draining construction.

P.S.1 was founded in 1971 by Alanna Heiss as the Institute of Art and Urban Resources Inc. The center now operates two internationally renowned spaces for contemporary art in Long Island and Tribeca. P.S.1 is widely recognized as a defining force in the alternative space movement. P.S.1 functions as both a living and active meeting space for the general public.