Technomad Associates, LLC, a leader in weatherproof loudspeakers and audio systems since 1995, introduces the Schedulon, a new automatic mp3 player and recording system for themed entertainment, high-quality music playback, simulated environments, and commercial security applications. Unique to the commercial market for its flexible scheduling and recording features, the Schedulon is a sibling of Technomad’s popular SuperConductor player/recorder used in military and homeland security applications. The Schedulon will receive its public debut at the upcoming Infocomm show, taking place June 18-20 at the Las Vegas Convention Center. 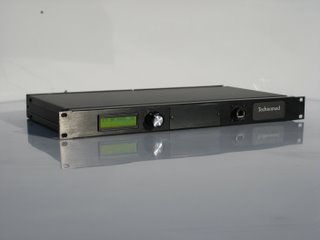 The Schedulon provides instant playback of up to 99 knob-assigned, user-loaded audio files from a front-panel screen, and allows automatic playback on a user-defined schedule based on an internal clock or synchronized network time server. Operators can interrupt automatic messages and play a knob-assigned siren or emergency announcement from an internal sound library in critical situations.

The Schedulon can function as the audio source for a single PA system (in the same way a CD player or iPod can), or it can be used to feed audio to large scale paging / BGM systems in airports or retail spaces. The unit can integrate with a single set of loudspeakers for indoor/outdoor playback of voice, sound effects and background music to a concentrated area, such as a sports stadium, entertainment venue or retail environment; or within a networked PA system to cover larger areas such as theme parks, cruise ships, airports or ground transportation centers. It is also ideal for commercial security applications on multi-building campuses including universities, business complexes and industrial parks.

Scheduling can be as straightforward or complex as desired, down to the exact time of day. Airports can connect the Schedulon to existing facility paging systems to broadcast automatic announcements. The scheduling application is also ideal for themed entertainment. Amusement parks can use the Schedulon to create a collage of audio sounds and effects scheduled to suit the changing atmosphere. Manual operation is ideal for live sports, where PA system operators can interject music and cheers over Technomad weatherproof loudspeakers from the front-knob position to coincide with game highlights and breaks in the action.

Operators can also use the Schedulon to record field audio for instant or future playback via the user-defined schedule. All recording, uploading and scheduling tasks can be achieved without the need for a computer or web browser to minimize the risk of crashes and viruses.

The Schedulon gives operators the freedom to flexibly schedule and record sounds that match the environs of the venue or installation site, said Rodger von Kries, vice president of Technomad. Operators using the Schedulon for background music and other entertainment applications eliminate the process of constantly changing CDs and audio source equipment. For commercial security, the Schedulon can interface with audio distribution equipment to trigger alarms and pre-recorded emergency messages over PA loudspeakers, serving as a powerful message repeater and campus-wide alert system. Although manual operation is a benefit for instant playback of audio, the scheduling feature ensures that operators are not tied down to monitoring the playback operation.