The Queen Mary 2, the largest and most expensive cruise ship ever built, set sail from her homeport of Southampton, England on her maiden voyage ­ a Trans-Atlantic trek to Ft. Lauderdale, Florida ­ with a full complement of Technomad loudspeakers distributed throughout her exterior entertainment decks. Nautilus Entertainment Design, a La Jolla, CA, based design and engineering firm, was commissioned to write the specification for the QM2, and given the responsibility to design the local entertainment systems. The result of this effort was to outfit the new luxury liners pool and entertainment decks with state-of-the-art, high-fidelity Technomad loudspeakers.

The QM2 measures 1,132 feet from stern to bow, some 113 feet longer than the original, venerable Queen Mary, and holds 2,620 passengers and 1,253 crewmembers when fully loaded. The vessel, larger and more populous than some land-based cities, is the new flagship ocean liner for the prestigious Cunard Line, which also sails the luxurious Queen Elizabeth 2 and Caronia cruise ships.

The distributed, exterior sound system called for high-fidelity audio to match the ship’s lofty standard of excellence. In addition, any outdoor/exterior deck loudspeakers would have to withstand year-round exposure from the sun, sky and seven seas. For nearly a decade, Technomad’s weatherproof line of loudspeakers remains the first choice for high-fidelity outdoor sound by nearly all cruise ship lines. Technomad’s mil-spec construction is able to withstand salt spray, humidity, fog, rain, penetrating tropical sun, unrelenting constant year-round use, and fast transitions between hot and cold temperatures.

Also attractive to both Harbour Marine Systems and Cunard was Technomad’s willingness to stand by their craftsmanship, as evidenced by the most comprehensive warranty in the industry: 10 years cabinet, 5 years external cabinet hardware and 2 years electronic component warranty. 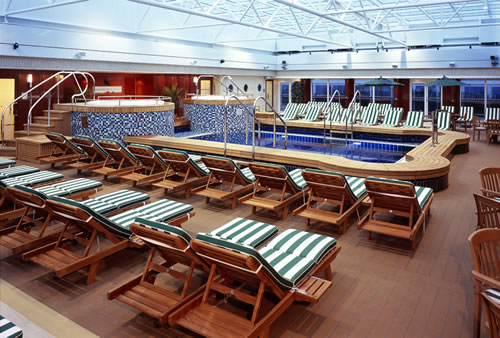 The Pavilion Pool deck on the QM 2. Technomad loudspeakers are installed around the perimeter.