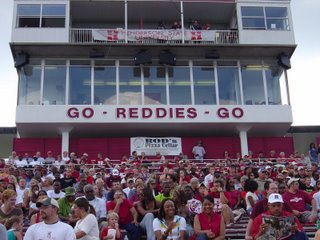 The university purchased six Technomad Berlin 15/H Install loudspeakers and two Technomad Paris 616 loudspeakers through Troxell Communications, along with two PA racks filled with new mixers, amplifiers and signal processors. Four of the Berlin 15/H Install loudspeakers were installed on the press box by the home bleachers, with the other two installed on poles next to the visitor bleachers. The Paris 616 loudspeakers were installed lengthwise on the ceiling of the press box overhang to provide a direct audio source to the alumni seats underneath.

The Berlin 15/H loudspeakers on the visitor side receive the signal from the main PA system via a wireless transmitter. A smaller PA rack in the visitor concession stand includes a wireless receiver, which feeds the signal to a delay processor before reaching the amplifier. The result is a perfectly blended live broadcast for everyone in the stadium.