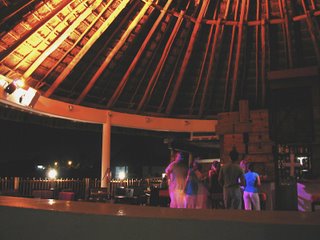 Hurricane Wilma tore through the Gulf of Mexico in early fall, 2005, settling on top of the Yucatan Peninsula and barely moving for 48 hours. After making its exit, some of Mexico’s most famous resort areas, including the city of Cancun, were left battered and faced with a long period of rebuilding.

Club Med Cancun, with its shoreline location, was just one of many resorts that sustained heavy damage from winds, rain and an unrelenting storm surge. The club took the opportunity to rebuild its lighting and sound infrastructure along with much of its resort, favoring high-fidelity audio products and a lighting system that was easy to operate yet technically advanced enough to produce the right atmosphere in each room.

The Core Audio team, in cooperation with Whump Sound, a Los Angeles based dealer specializing in audio installations, led the systems integration. Technomad loudspeakers were selected for all open-air venues, partially due to the true weatherproof design of the loudspeakers. These venues include a mix of restaurants, bars and entertainment areas plus the valet greeting area in front of the resort.

According to Bill Weir of Core Audio, Many resorts of this size put budget over any other consideration when choosing equipment and the audio reproduction at the end point is anything but musical. Club Med Cancun uses a 24-bit distribution system that plays back high resolution audio files, and that fidelity is well represented in each zone due to the choice of loudspeakers … the range of products that can withstand the Cancun environment is very limited, and Technomad meets both the musical and environmental requirements.

The outdoor entertainment area, known as The Chispa, offers a movie theater and a performance area with an exceptional A/V and lighting system. The central kiosk area is peppered with palm trees that are lit using Color Kinetics color blasts. The LED fixtures for each palm tree are automated using a Martin Light Jockey control system, with 220 volt power lines providing juice to each palm tree. Like the Soluna, the lighting for this zone is customized to match the event, and can be manually operated on theme nights using a small 8-button switcher. Martin 250 Kryptons and Washes were also installed in the theater area.

The Chispa movie theater is perhaps the most unique aspect of the resort, and according to Weir, a one-of-its-kind system. The integration team painted one side of a three-story hotel building on the resort with retro-reflective, high-gain paint. Guests can sit on the beach or on bench seating in the pool area to watch movies projected onto the building.
DJs and performance groups can also take advantage of this outdoor entertainment area. A pair of Technomad Berlin loudspeakers was purchased for mobile events, and plug in to rack systems on the performance stage.

The remaining room-to-room breakdown of Technomad loudspeakers include: The Pergola, a beach bar that features four Noho-C Install loudspeakers hung 9 feet above the crowd and two Chicago 15/H Install subwoofers at two corners along the baseboards; eight Vernals 15’s in The Chispa and Las Velas, the pool bar; and Noho-C Install and Vernal 15 loudspeakers in the valet area, which play back low volume music as guests enter the resort. Crown DSI series amplifiers are used to power the audio in each of these zones, offering full parametric EQ, crossover functions and basic signal processing.

The Berlins were specifically chosen for mobile events because they are high quality, full range portable loudspeakers that can be used anywhere on the resort at a moment’s notice, said Weir. They offer a full range of sound with excellent bass response and a very nice tonal quality that is ideal for DJ sets. In the Pergola, the Nohos produce enough sound pressure levels at 1 a.m. so that people who want it loud can turn up the volume, but still produce a full, pleasing sound at lower volumes. This was the same idea we had for the Vernal 15 installation in the pollapa, with a higher emphasis on producing clearly audible sound at low levels for conversational situations.

Note: This article was originally published in a longer format in the October, 2007 printed and online editions of Lighting & Sound America.