BOSTON, May 28, 2008-Technomad Associates, LLC today announced that Middle Tennessee State University (MTSU) in Murfreesboro, Tenn., has selected Technomad outdoor weatherproof loudspeakers to provide high-quality voice and music for live sports coverage in its new 2,500 seat stadium. The loudspeakers are the crown jewel of the PA system used for soccer games and track and field events, with only two Technomad Berlin loudspeakers required to cover the entire stadium with a smooth, intelligible audio pattern. 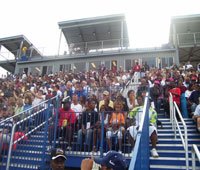 The stadium, home to the MTSU Blue Raiders teams that play in the Division One Sun Belt Conference, is the newest venue within the university’s Murphy Center Complex, which comprises all the athletic venues on campus. According to Josh Hoevelmann, Electronic Equipment Engineer for MTSU Murphy Center, the Technomad Berlin loudspeakers rival the larger PA systems used for the football and baseball stadiums on campus.

Everyone I talk to on campus is surprised at the audio quality and power output we’re achieving from just two loudspeakers, said Hoevelmann. The output is extremely clear even at mid-field, and it’s not overbearing in the stands. The Berlins provide a full range sound with mids and lower levels as opposed to some of our other systems that produce mostly highs in the output.

Hoevelmann and his team built the PA rack and installed the loudspeakers, which were custom-ordered from Technomad in blue to match the team colors that are visible throughout the stadium. The loudspeakers were installed on the opposite corners of the press box exterior to ensure that those at the farthest corners of the field could clearly hear the audio, particularly during track and field events when the attendance can far exceed the official seating. In addition to providing even coverage throughout the stadium, the smooth audio pattern eliminates bleeding into nearby residential neighborhoods an ongoing challenge for the university.

There is residential housing across the street from the complex, and the original design called for installing the loudspeakers in the scoreboard, which faces the neighborhood, said Hoevelmann. We decided to move the installation to the press box, which in theory would still bleed into the neighborhoods, but the Technomads have maintained a good balance of being intelligible to everyone inside the stadium and not killing nearby residents with bleed-over. There have been zero complaints from neighbors unlike in past years.

The loudspeakers sit outside all year unprotected from the elements, which according to Hoevelmann include intense rain and hail in the fall and winter, and high heat in the summer. The weatherproof construction is only one aspect of the design that he and his team have found favorable. The loudspeakers are unconventionally mounted on the press box: Instead of using the supplied mounting brackets, the installation team took advantage of fly points on the Berlins and chained them to a fence sitting atop the press box.

The press box construction did not allow us to use the brackets, but the loudspeakers offer many fly points in the design to use eye bolts for unconventional installations, said Hoevelmann. The design made it very easy to hang the loudspeakers and chain them to the press box fence for a secure installation. The bonus is the blue color choice as installed; they match perfectly to the blue colors in the stadium. The assistant athletic director didn’t event notice them during the initial walkthrough because they blend in so well with the press box.