All of the T-Rex sound effects on scene 12 roar out of a Technomad sound system consisting of six Berlin 15/H two-way, full-range loudspeakers and eight Chicago 15/12 subwoofers. The Chicago subs are distributed on the platforms, four subs on each side of the boat track, to deliver T-Rex’s ominous footstep sound effects. Six Berlin loudspeakers deliver the blood-curdling roar of T-Rex, as the animatronics beast lunges at the spectators in the final moments of the ride. Two Berlin loudspeakers are installed approximately 25 feet above the boat track, and fire directly down on the spectators. Two additional Berlin are positioned left and right of the boat track, one per side, parallel to the overhead Berlin loudspeakers, again within 25 feet of the spectators. The final two of six Berlins are suspended in the waterfall, positioned left and right of the animatronics T-Rex, approximately 35 feet above the floor, and approximately 60 feet from the spectators. The volumes of the six Berlins are EQ-ed and blended to deliver the most effectively terrifying sound effect in the themed entertainment industry. 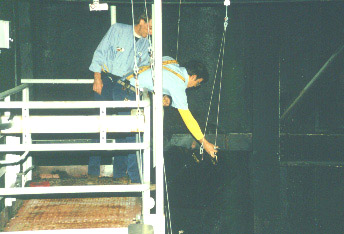 According to Mr. Jim Schmidt, Manager of Attraction Engineering, “We are continually amazed the Technomads continue to perform under these conditions. After several weeks, we simply decided to leave them in place just to see how long they would last. Fifteen months later, they are still in perfect working order.”

Mr. Schmidt concludes, “Universal is really the proving ground for new products and technology. We burn it up, blow it up or try to drown it. If a product can survive this environment, it can survive just about anywhere. The Technomad loudspeakers have proven they are survivors.”