The College of New Jersey’s Jon Bannan, oversaw the installation of the system. Jon is in charge of overseeing all upgrades to, as well as installations of, all of the school’s Sound Systems. Having never heard the Technomad loudspeakers before, Jon made the decision to purchase the Noho/C loudspeakers based upon the company’s reputation of producing mil-spec loudspeakers that can withstand all forms of in climate weather and abuse. Another important decision was the low-profile appearance of the Technomad Noho/C loudspeakers. Jon states, “I had looked into other weather-resistant loudspeakers, but they were big and unsightly and could not be mounted where they had to be positioned. Even if I could install the other loudspeakers where they had to go, they would have obstructed the sight-lines of too many seats.”

Jon notes, “It had to be a clean-looking, low profile system installation yet have the output I needed to cover 9,000 people. I didn’t want oversized, unsightly white or beige air raid horns or bulbous cannon-looking things hanging from all the light poles.” Jon ponders, “Air raid horns? The Cold War is over, and the latter option would look like the wind blew all the plastic garbage cans up onto the lampposts.” Jon continues, “The Technomads were also hundreds of dollars less per speaker.”

Jon states, “When the loudspeakers finally arrived, they appeared even smaller in real-life then what I had expected. I was starting to get worried that they were going to be too small in comparison to the overall size of the stadium.” Jon continues, “But, as soon as I powered up the amplifier rack and pumped some music through the system, I was very impressed. The Noho/Cs absolutely amazed me.” 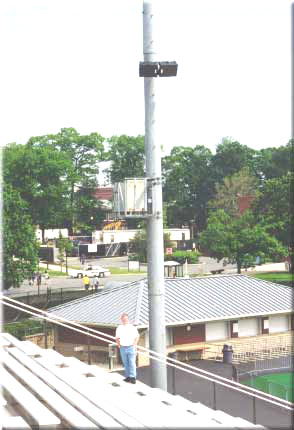 The Stadium’s light poles were perfectly positioned for the installation of the eight Technomad Noho/Cs. “It’s as if someone had this speaker installation in mind when they installed the light poles,” Jon says. The poles are located halfway up the stadium seating, providing the perfect place where the Noho/C loudspeakers could provide complete sound coverage for all the seating, and not obstruct sight-lines. Jon states, “Installing two Noho/Cs per pole allowed me to provide the tightest, most accurate and even sound distribution.”

Jon adds, “The Nohos respond extremely well to my changes on EQ and I was able to dial-in the exact setting that made everyone on staff very happy. The Noho/Cs is extremely EQ compliant and offers me unrivaled control over every type of program material, regardless if it’s recorded music, spoken word or sound effects.” Jon notes, “A soundman can add lower end punch to the music program during half-time events with just a simple low-frequency EQ boost, and the crowd can actually hear and feel it!”

The two QSC PLX 1602 power amps, running in parallel, drive the Technomad loudspeakers. A Furman ASD 120 Power Sequencer, a DBX 266XL, a Rane dual31 band EQ, and Alesis 12R mixer make-up the signal processing equipment. To keep the processing gear free and clear of prying hands, the processing rack is located in a separate room. A Sony Tape Deck and CD player is located in the Press Box. Twelve wall-mounted mic jacks are also strategically installed in the Press Box. Jon notes, “All a tech has to do is plug in a mic and cue the commentator.” Jon points out, “The system is not constantly staffed by a tech, so I designed the system to be as turnkey as possible. All a tech or an announcer has to do is turn the key and they have power.”

“My boss, the Athletic department, the teams and the cheerleaders are very happy with the dramatic improvement in the sound quality and clarity the Noho’s produce,” Jon states proudly. “The wide dispersion and quick cut-off of the Noho’s 12″ coaxial driver is as equally impressive as the high-fidelity sound it produces.” 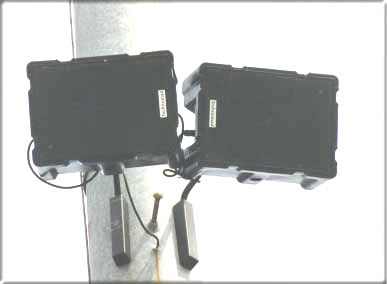 With the previous sound system, Jon continually experienced problems with ‘sound bleeding’ off the field into the surrounding neighborhood. “I don’t believe a lot of effort was put into the properly installing the previous speaker system,” Jon notes. “You could hear sound everywhere except on the field. Pedestrians and neighbors of the school could hear the announcer and music far off campus, unintelligibly and loudly I might add, which resulted in many complaints.” Jon quips, “I don’t think we would have received so many sound bleed complaints if the previous sound system just sounded halfway decent.”

Jon concludes, “As soon as the system was up-and-running, I walked the field and the seating and I could not find a single hot spot or dead spot. It’s complete, even distribution. Then I stepped outside of the complex for the most important test. The sound cut-off to more than acceptable levels as soon as I got out of the seating area. The best part, no complaints opening day and since then! Just compliments.”