Papa’s & Beer, located in Rosarito, Mexico, resemble a mysterious fantasy city one would expect Indiana Jones to stumble across in his traverses through the darker continents of Africa or South American. Six story tall wood pillars as wide as a car tires, support fantastically designed wooden structures that appear as if they rival gravity to stay aloft. Palm trees and other exotic foliage sway in the hot Mexican breeze and in the evening, huge, natural gas-fed flames make Papas & Beer visible, if not from space, then to ships out on the horizon. This massive, multi-level structure, sprawls on the shore of the Pacific Ocean, a quick thirty miles drive south of San Diego. On any given evening, especially weekends and those times during the year when colleges around America release their party-starved masses, this Mecca to beguilement, plays host to over 4,000, sometime scantily clad, thrill seekers. Herman Addleson, President of Bright Ideas, of Chula Vista, California, comments, “I have seen young ladies make use of only Papa’s & Beer bumper stickers to create some very interesting bikini designs, especially when the parties really get going later in the evening.” Mr. Addleson adds, “Needless to say, Papas & Beer can be a very fun place.” Mr. Addleson, along with assistance of towards 2000 of Burbank, California, takes credit for installing the new 24,000 watt sound system consisting of, primarily Technomad loudspeakers, QSC amplification, and Rane DJ equipment. The location of the massive Papa’s & Beer nightclub is a mere few hundred feet from the Pacific Ocean, and a steady wind comes off the water constantly. The salt air, blazing sun, sand and incredibly fine dust, and often times, sea spray, does not make for the healthiest of atmospheres for loudspeakers and other very sensitive audio equipment. The first task was to install a powerful enough speaker system to make the party goers happy, but also to make the management happy in the respect they did not want to repair weather damaged loudspeakers constantly. Mr. Addleson, turning to Danny Quinones of towards 2000, needed to find a loudspeakers system that would endure these harsh elements. 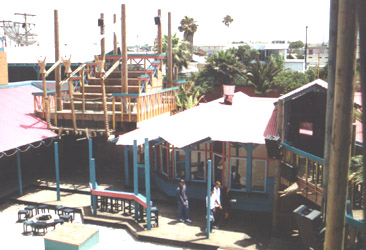 Danny recommended Technomad loudspeakers for the project. Danny was familiar with Technomad loudspeakers from reading about similar Technomad applications aboard Princess, Royal Caribbean, Celebrity and American Hawaiian Cruise Lines, as well as Universal Studios Hollywood. Built into military specification 810E cabinets with highly weather resistant components and drivers, Technomad loudspeakers are designed for installations such as Papas & Beer. Technomad manufactures the only line of off-the-shelf high-powered, high-fidelity loudspeakers that are resistant to water, sand, salt, temperature, mold, mildew, and condensation, chemical, insect and other damage. To withstand what the Pacific can do to sensitive audio equipment, Technomad was the best choice for the Papa’s & Beer installation. Nineteen QSC MX and EX series amplifiers, totaling over 24,000 Watts of power, drive the 44 speaker sound system. The QSC amplifiers were chose for “reliability” according to Quinones, indifference to the unforgiving environment and the high demands of the sound system. EX 2500s fuel the lows with 1,000 Watts/ch at 2 Ohms, while EX 1600s power the mids (800 Watts/ch), and EX 1250s handle the highs (600 Watts/ch). The EX and MX amplifiers also feature high-efficiency step-linear output circuits to minimize waste heat and increase efficiency by up to 40%. The Class H-type circuits allows the amplifiers to use less power when it reproduces lower-power signals, yet keeps a reserve of high power available for accurate reproduction of peaks. Eight Technomad Cairo-3 way biamped loudspeakers are suspended over the large open-air, elevated primary dance area and the centralized volleyball court. The very deep low-end response of the Technomad Cairo eliminates the need for additional subwoofers, thereby allowing more floor space for the dancers, as well as delivering greater low-end into areas that cannot accommodate large format subs. Eight ultra-compact Technomad Chicago subwoofer, newly augmented with Cerwin-Vega subs, are distributed in ‘close-quarter’ areas where larger format subwoofers would eat-up too much physical space. Four Berlin 15/H model loudspeakers are used in the secondary dance area, along with two ‘surviving’ JBL SR-series 15″ 2-way cabinets. Eight Noho/C loudspeakers are distributed through-out the entryway to the facility, and on two of the upper level bar areas and the mini dance floor next to the main bar. Eight Electro Voice SX 200 loudspeakers, augmented by four Electro Voice SB 200 subwoofers, provide the music for the two ground level main bar areas. The newest innovative audio mixing gear available from Rane, Denon and Studio quad was installed along with a unique zone-control system. From the booth the DJ can control five different zones of sound in 8 different areas of the facility. The DJ booth was completely re-designed and enlarged to make room for the new equipment. Two Rane mixers, Studioquad effects, a BBE Sonic Maximizer, crossovers and limiters are from DBX and Rane, dual CD and cassette players are from Denon, two Techniques turntables and a Samson wireless mic system adorn the massive, air-conditioned DJ booth that overlooks the entire facility and the 4,000 partiers who are usually on hand. A new modular rack system with storage capacity for over 1,500 records, 1,000 CDs and 500 videos, was also installed. DJ’s can quickly find the music or videos they are looking for on the fly, as opposed to having the music partially hidden and inaccessible as in the past.