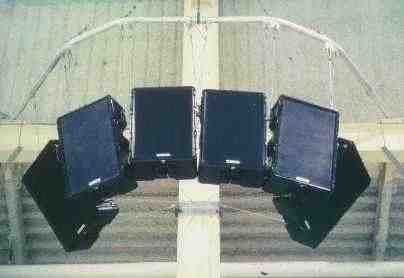 The Canada Games Complex is a very well-known fitness facility in Thunder Bay, Ontario, Canada. It is used by over 1,000 people per day, in an area that has a population of only approximately 175,000. “Needless to say,” notes Nat/Com’s Brad Oja, “it’s a popular place.

” The original sound system in this room was installed when the building was constructed in 1981. Every two years – “like clockwork” – the system had to be completely rebuilt with all new drivers, diaphragms and other vital hardware. The corrosion that developed on the former sound system over short periods of time gradually reduced the system to complete uselessness. The system had to be shut down for a week while it was rebuilt. It was simply getting too expensive to maintain. It got to the point that the cost to maintain the system greatly outweighed the expense of installing a new system that was designed to endure and last in the harsh pool environment.

Mr. Oja was assisted on this project by Wayne Faulconer of W.F. Com. Spec, of Thunder Bay, Canada. Mr. Faulconer states, “To give you an indication of how caustic this atmosphere is to audio equipment, I recently went to remove the mic jacks from the back of a mixing console. The screwdriver went through the console’s metal plate, leaving the XLRs dangling in mid-air, only attached to their wires.” Wayne continues, “The manager of the Canada Games Complex is a far-sighted guy who wanted to invest in a new sound system with a long life cycle. Plus, it was apparent he was tired of being the target for all of the flack whenever the system crashed or if the sound was inaudible during special events.” 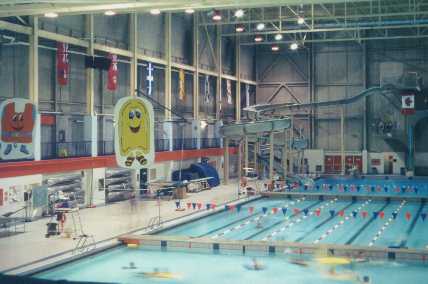 Essentially, Nat/Com “took a gamble by spacing Technomad” into the Canada Games Complex project. Brad is quick to point out, that neither he, nor the customer, had ever heard of Technomad loudspeakers prior to the quoting on the installation. Both Brad and Wayne felt it necessary to position Nat/Com apart from the competition and provide a speaker system that was going to hold up to the elements, chemicals, and humidity. Wayne suggested Nat/Com should investigate Technomad loudspeaker products, based upon Technomad’s “extraordinary claims” of ‘built to military specifications’ and their resistance to withstand weather, water and chemicals. The fact that Technomad WeatherTech loudspeakers are Mil-Spec, and are designed for ‘caustic’ applications convinced Brad and Wayne they found the right speaker for their customer’s needs. Brad states, “We needed it to set us apart in order to get the job, and, overall, I would have to say, Technomad closed the deal for us.”

Brad continues, “We were very impressed with the specs on paper, and I have to say, the products more then lived up to, and exceeded our, and our customer’s, needs. We tested each speaker on the pool deck before we rigged them for the array, and I have to say, they really blew us away. Technomad was definitely the right choice for this installation.”

Wayne states, “What excites me is the way the Technomads are EQ-ed and the ability to order them with specific, customized EQ settings for specific environments. Otherwise they can be ordered with the adjustable on-board ‘EQ’, known as the Passive Processor.

Technomad loudspeakers are offered with a unique five position, internal Passive Processor¥ EQ System. The Passive Processor significantly reduces or eliminates the need for outboard EQ, thereby reducing expense and system complexity. The EQ contour of a Technomad full-range loudspeaker is ‘shaped’ by the Passive Processor, allowing the operator to compensate for nominal listening distance, atmospheric absorption, and other conditions with a simple, on-loudspeaker adjustment.

Brad states, “The competition came in with literally the exact same system design as a replacement to the existing system. The only difference was, they suggested a few ‘flown’ bass bins to augment the lack of low-end the previous system always suffered from.”

When the management of the Canada Games Complex really started to get into the nitty-gritty of the various proposed systems, the first question asked was, ‘Will your sound system stand up to the elements in this indoor pool environment?’ Every single engineering department of every manufacturer solicited stated the same single word answer; ‘No.’ Brad humorously notes, “That’s the problem with engineers, they have some ingrained gene that forces them to tell the truth… which in this case was good for Nat/Com and Technomad. We had not doubt the Technomads would go the distance.

The pool room of the Canada Games Complex is huge, with 65 foot tall ceilings and the array is suspended at 45 feet about the pool deck. Wayne notes, “No expense was spared in doing this job right. Every bit of arraying hardware, from the cables, to the nuts and bolts is all stainless steel to assure the system is going to last, and the custom made D-ring support bar is aluminum.” In the arraying of the Technomad system, an elaborate, multi-level truss system needs to be constructed over five days. The installation would have taken 50% less time if a lift truck could have been brought out onto the pool deck, but it was quickly determined that the weight of the lift truck would damage, if not destroy, the fragile tiles of the 15 foot wide pool deck.

The three amps that drive the Technomad Berlin loudspeakers are Crest S-1500s. Outboard processing consists of a Biamp 31 band EQ, a Sony DMX Digital Music Source, and a Biamp 8 Channel Mixing console. A five disc Sony CD player was added to the system as the background music source. Nat/Com also added a KDM Mini Remote Mixer for events that require mixing from remote locations through-out the facility. Microphones are all Rauland 1295 desk-top mics, and a Shure LX Series Wireless microphone system remains from the previous system. A telephone interface paging system was added and microphones are positioned in key locations throughout the building. Eight microphone jacks are located around the pool area, so, depending upon the event, commentators can be positioned in key viewing and announcing locations.

The new Technomad system is used for primarily voice and paging applications, but when major swimming events are held in this pool, the system is called on to deliver a serious amount of power and fidelity. Wayne states, “Everything from paging to music is crisp and clear and the intelligibility is great. The fidelity is so nice, and because the Technomad system is so well-damped, reverberation in the room has been greatly reduced.”

Brad notes, “We really scared the hell out of a lot of people with the new Technomad system. Everyone who works at the facility was very used to ‘eating’ the mic when making an announcement in order to be heard. When you’re used to eating the mic for years, and you immediately start screaming into the system in order to compensate for its shortcomings, it’s a hard habit to break. People forget there is a new sound system and they are blown across the room if they approach the microphone screaming an announcement. We are still getting a lot of startled looks from people who thought they were going to get the same weak output as before, and then they are stunned by the new found power, clarity and articulation from the Technomads. Wayne concludes, “In Canada, we have some really harsh weather conditions and a lot of various harsh indoor environments from pools to ice rinks. I cannot suggest a better speaker then Technomad WeatherTechs for these types of applications.”