Tony Gwynn Stadium became the new home of the San Diego State University baseball program during the 1997 season. Groundbreaking for the project took place on August 21, 1996. The structure is named in honor of the former Aztec and current Padre 13 time All-Star right fielder, Tony Gwynn. The 38 year old, future Hall-of-Famer, who has hit a remarkable .368 over the last five years, entered the 1998 season with a lifetime batting average of .340, tying him for 15th place on the all-time list with George Sisler and Lou Gehrig. Also, at the start of the 1998 season, the eight-time batting champion was only 220 hits away from the prestigious 3,000-hit plateau – a level only 21 players have attained.

Equally impressive are the stats of the stadium that bares his name. The $4 million facility was made possible through the generosity of San Diego Padres owner John Moores and his wife, Becky, who donated the funds to make the dream of a state-of-the-art stadium for SDSU Aztec Coach, Jim Dietz, and a reality. The design consultant firm of Helmuth, Obata and Kassbaum, Inc., has been involved in numerous baseball facility projects including Coors Field in Denver, Camden Yards in Baltimore and Jacob’s Field in Cleveland, in addition to several minor league parks including the San Diego Padres spring training facility in Peoria, Arizona.

Stadium lighting consists of six poles using 2000-watt fixtures, making the facility one of the well-lit fields in college and professional baseball. The Coca-Cola Company of San Diego is the Sponsor of the electronic scoreboard located behind the right centerfield fence. A hydraulic elevator takes media and VIPs from the ground level to the radio and television press boxes and there are four adjacent sky boxes for visiting dignitaries and groups. Seating capacity is approximately 4,000. Upon completion, Tony Gwynn Stadium was quickly hailed by Baseball America Magazine, ranking it the fifth-best collegiate facility in the nation and the second best park in the western half of the nation.

“In mid-December 1996, we were approached by the construction management team to provide a sound system, since one was not planned in the original specs,” notes Mike Fay of Audio Associates of La Mesa, California. In spite of the large overall budget for the facility itself, the budget for the sound system was fairly tight, yet instructions stated; clarity, musicality, coverage and power was not to be compromised. The project became a real challenge in where Audio Associates had to budget, design, find and acquire the right equipment, get client approval, and install the job in less than 60 days. Mr. Fay states, “Ultimately, this project allowed us to try out new technology, and continually find success with proven technology, in order to meet the demands of the client and deadlines of the construction team.”

The criteria called for sound coverage on the main seating areas and the right field bleacher seating. As Murphy’s Law would have it, there are a series of apartment buildings in close proximity to the main seating areas, on the west side of the stadium. The project became even more of a challenge when Mr. Fay’s design instructions stated, there were not going to be any structures from where to hang loudspeakers out in front of the seating areas. The university did not want any problems with sound bleeding onto the close-proximity residential buildings. “The designers were very specific,” Mr. Fay is quick to point out. “We had to be very careful about not disturbing the neighbors.” 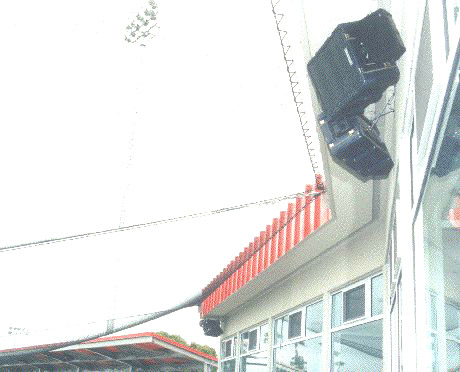 Therefore, Mr. Fay’s task was to design a system that would cover the spectators from behind their heads and deliver 90 dB at the front row, 80 to 100 feet from the loudspeakers. Mr. Fay notes, “I’m a ‘point source’ kind of guy. I like putting sound in front of people and I have never been real fond of distributing sound from behind the audience. After struggling with several ideas, I decided on distributing the loudspeakers under the roof structure, directly above the rear walkways. All of the loudspeakers are turned at 45 degrees away from home plate, firing out towards first and third base, to keep the sound moving in the same direction. Each zone is picked-up with a delay to reduce zone crossover, and minimize out-of-phase information and comb filtering.”

Posing another interesting dilemma, the sound system was to be left inactive most of the year, from May, when the College World Series ends, until practice starts again in January or February. Eight months is a long time for a speaker system to remain inactive, outdoors. Mr. Fay’s task of making a high-fidelity system sound articulate and smooth, in each and every seat, seemed almost trivial compared to the requirement of, “How are we going to keep these loudspeakers from falling apart every two years?” Mr. Fay states, “If we were to install wooden cabinets, we would incur additional time and labor costs to dismantle, fiberglass, and then reassemble each cabinet. After we did the entire math, it just did not make dollars and sense for us to weatherize wooden loudspeakers. The time and the budget were simply not there.”

Mr. Fay notes, “When I design a system, I start with the loudspeaker. I figure out what it’s going to take to do the job and I design back down the signal path to the microphone.” The loudspeakers had to be physically small as not to cause a hazard. They were to be installed, recessed within the I-beam framework of the lower-than-normal roofs, a little over seven feet above the walkways. The client insisted for the sound system to ‘rock n’ roll’ when called upon to deliver morale-boosting ‘team’ music. Therefore, the loudspeakers also had to have an extremely smooth output, at high SPLs, so not to become abrasive to the spectators seated in the back rows.

Nine, military-specification Technomad WeatherTech Noho/C Installation model loudspeakers were called for since they met Mr. Fay’s criteria for compact size, extremely high output, uniform dispersion characteristics, and studio-monitor-like sound quality. With the Noho’s articulate, subwoofer-like low-end response, the pulse of the rhythm and groove would not dissipate over great distances. A reputation of proven reliability in every imaginable weather condition, combined with the simple, sheer economy of being the only off-the-shelf, high-powered, high-fidelity, weatherized loudspeaker available, assured Mr. Fay the Noho/C loudspeakers would meet, if not exceed, the customer’s requirements and expectations.

Twelve OWI 502 model loudspeakers were utilized as down and spot fills. Mr. Fay points out, “The 502 fill loudspeakers ‘touch-up’ small areas of seats and walkway, almost directly underneath the Noho/C loudspeakers.” The provided mounting bracket for the 502 speaker, coincidentally, perfectly matched the bolt pattern of the Noho/C’s handle. Continuing, Mr. Fay states, “This allowed us to mount the 502 speaker directly onto the Noho/C itself, thereby allowing the 502 to deliver a more uniform down-fill to the areas underneath the Noho/C.

Mr. Fay again continued in a direction of cost efficiency, quality, reliability, and sonic performance, knowing full well, amplifiers can make or break a sound system, and a budget. Mr. Fay did not want to skimp on such a vital component and install something truly cheap just to save a few dollars.

With such a wide disparity in amp prices, power handling abilities, physical sizes, and warranties, it was quickly determined the amp that would make the system sound the best, and provide the greatest piece-of-mind, would be the QSC USA Series. “This job was a matter of; how many reliable, performance Watts can I get for the customer’s dollar? QSC has a nice range of packages stepping through every power requirement. For cost effectiveness, without sacrificing performance, I use the QSC USA and the CX Series,” states Mr. Fay. “The price points are very respectable and they have consistently proven to be very reliable. QSC’s available six year warranty, combined with Technomad’s equally impressive, lengthy warranty, really put the customer’s – and my – mind at ease.”

Three QSC USA 1310s and two USA 900s power the nine Technomad Noho/Cs and twelve OWI 502s that cover the five delay zones. On each side of the stadium, one delay channel and one amp channel is assigned to each mirror-image speaker zone, powering the loudspeakers at 4 Ohms. Mr. Fay notes, “Therefore, I maximize my amp real estate assuring I have ample low-end power for when they drop-in music between innings.”

Since this turn-key system could be operated by individuals of various technical experiences, a double fail-safe of protection was incorporated to the signal chain beyond the compressors. The USA Series’ user selectable clip limiters provide an additional level of protection against excessive distortion, automatically reducing clipping before harsh limiting kicks in. The QSC’s clip limiters continually allow the amp to provide significant power to the loudspeakers, reducing peaks, significantly reducing distortion. Additionally, variable low-frequency filters (30 Hz, 50 Hz, or flat) reduce potential speaker damage below box tuning frequencies, and increases power available for low frequencies within the speaker’s operating range.

Sound coverage for the right outfield bleacher seating is provided by one Technomad Noho. The absence of a roof structure over this seating area made speaker mounting a unique endeavor, aside for the fact the cable run is over 1,000 feet from the amp rack. The closest structure in where to install the speaker was 25 feet above the ground, on the light pole, 45 to 50 feet to the left of the bleacher seats. “That one speaker is working out very well in terms of covering the 55 foot-long outfield bleachers,” states Mr. Fay. “We ran a single pair of 12 gauges to the speaker, from its own amp channel off a USA 900, and we experienced less than 2.5 dB of line loss. The USA 900 amp provides the Noho/C with enough power to project over the 50 foot distance to the bleachers, and cover the entire seating area at 90 dB, within + 3 dB, while making up for any discernible line loss.”

“During the design phase,” Mr. Fay notes, “I kept stating to myself, ‘I think this is going to work, the design criteria’s are all matching up.’ I am always concerned about how one cabinet is going to take over when one drops off, and is the dispersion pattern going to be right for the amount of loudspeakers, space and distances. You never know for sure how such a unique, distributed sound system – where every cabinet is behind the audience and off angle – will work out. You can always plot these things out on paper, but you never know for sure until it’s up and running.”

Mr. Fay continues, “I was here for the inauguration of the stadium and I sat in various seats to gauge the coverage and output of the system. They had the system running very hot the entire day, at about 75%, playing some party and 50’s Rock N’ Roll between announcements, innings and speeches. The moment I knew, for sure, we did the right thing with this system was an opera singer; an operatic soprano – who had NO mic technique at all – sang the National Anthem. At the end of the song, she did an octave jump, full voice with mic-in-mouth. I heard it coming and she nailed the note. No distortion, no clipping; the entire system held together very nicely. That means the gain structure is good, the loudspeakers hung in there, the amps are right, the delays are set; nothing went out of whack. I said to myself, if it can handle that, it can handle anything.”

Mr. Fay concludes, “There are no discernible delay problems. You can walk this entire seating area and stadium and the sound coverage is extremely smooth. SPL’s are +3 dB at any seat in the house, which is very good considering how spread out this entire place is. The customer’s reaction is, they are very happy. Therefore, I am very happy. I have a tendency to be pretty fussy about things and I go into these jobs with certain expectations. This installation met my expectations dead on, and my expectations are pretty high. For this situation, this is darn close to ideal.”