Tampere, Finland – The Pyynikki Open Air Theatre, located on a beautiful wooded cape near central Tampere, with its world-famous revolving auditorium, is one of the oldest, and the most popular, open-air theatres in Finland. Scandinavian weather wreaks havoc on the sensitive technical equipment required for such a venue. Traditional “All-Weather” loudspeakers, that were designed for sunny California, usually become quite troublesome when installed outdoors for any amount of time through the hot, but sometimes very wet and cold, Finnish summer season 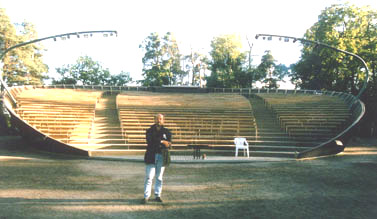 Some 70,000 people saw and heard the “Unknown Soldier.” A historic production based on the Finnish-Russian war in the Joselininniemi, 1941-1944. The “Unknown Soldier” is almost a national epos for the Finns. Everyone in the auditorium knows the story, which was written in 1954. The show was the largest production ever performed at the Pyynikki Theatre. Of the total production budget of 13 million Finnish Marks – approximately $2.5 million US – 130,000.00 Finnish Marks was used to update the sound reinforcement system.

The sound system designer of the show, Simo Savisaari, has experienced years of problems with soaking wet plywood loudspeaker cabinets, left ravaged from the weather. The previous loudspeakers were installed in the trees surrounding the theatre, from early May, when the weather is still usually quite chilly, until early September. At the end of those five months, most loudspeaker cabinets are completely ruined, even though extreme measures are taken to protect them, such as covers, tarps, etc.

“We used to call them disposable loudspeakers,” states Simo. “Most of the loudspeakers are hung in very awkward positions around the cape, so it is impossible for us to take them down every night. This installation is tough on traditional loudspeakers. Plus, it is a bit difficult to get the financial chief to buy new loudspeakers every year!”

SPEAKERS OF THE STORM

When Simo started to prepare for the spectacle; he decided to renew the whole speaker system with the highly weather resistant loudspeaker system. Based upon product reputation, Simo contacted Technomad LLP Technomad’s Finnish distributor, Musiikki Mode, provided the loudspeakers, and the sound crew of the Pyynikki Theatre gathered for the listening-test. The Technomad loudspeakers, designed to meet US Military Specifications, are extremely weather resistant, the sound was very intricate and detailed, and the unbelievable warranty from the manufacturer assured the Pyynikki team Technomad loudspeakers were going to the backbone of the new sound system. 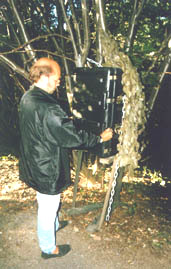 Simo is very pleased with his choice of loudspeakers. The Technomads have lived through the Finnish summer with no problems at all. Customized cast frame bass and coaxial drivers start out with paper cones, but after Technomad’s proprietary three-step chemical process is applied, the driver material more resembles plastic then paper. Technomad’s unique chemical treatment assures the cones will not absorb, or be effected by, water or moisture. The driver material will maintain the proper balance and mass to provide accurate audio in all environments. Technomad’s chemical process also extends the lifespan of the driver itself in extremely hot and dry conditions by preventing the cone material from drying out, weakening and cracking in short periods of time. Water, should it get on the drivers, simply sheds away, like water beading and running off a freshly waxed car.

A Technomad loudspeaker is built into a 3/4 inch thick, one-piece rotomolded shell, they are watertight when their protective lids are attached, and they are also highly resistant to the dust and sand that is kicked-up by the production’s extensive use of pyrotechnic effects. The three-layer, acoustically-transparent WeatherTech™ grill system, with its tight perforation pattern and inner layers of mesh and foam, breaks down and sheds away the most tenacious wind driven rain or water. These incredibly fine mesh and foam inner layers also prevent insects, rain, sand and even the finest dust from entering the cabinet. The precision-density, internal polyurethane foam also acts as a massive filter that collects extremely fine dust that might get past the three-layer grill system. Therefore, highly destructive dust is prevented from adversely affecting the voice coils and diaphragms. 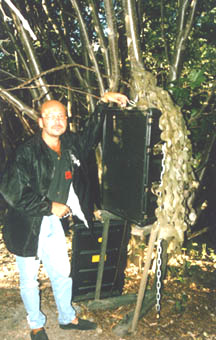 Simo notes, “Technomad’s product warranty is unbelievable. A Technomad cabinet is unconditionally warranted for ten years and the drivers and electronics are warranted against manufacturer’s defects in workmanship for two years! Technomads could probably can even withstand normal air-cargo transportation with no packaging! And that is a lot to withstand!”

SURROUNDED IN THE WOODS

The sound system of the Pyynikki Theatre is very straightforward. There are eight Technomad Cairo 15/C three-way, bi-amped loudspeakers and four Studiotec subwoofers surrounding the auditorium. As the auditorium revolves 360 degrees, the loudspeakers are used as main stereo pairs or as surround channels, depending on the current position of the rotating stage. Timo Alhanen cues the music and effects, composed by Anssi Tikanmäki. “It feels like the whole auditorium and the woods are full of sound. The audience of approximately 1,000 is right in the middle of the battle scene of the performance, with the machine-gun company all around them,” notes Timo.

Simo notes, “It’s wonderful to have some real sound pressure level from the new Technomad speaker system. Earlier we had to run the system at its limits, but with the very efficient Technomads, we have a lot of headroom!”

The increased fidelity is already making the sound design for next season more ambitious. “We’re going to go beyond the traditional dog-bark and car-horn stuff,” quips Simo. “The audience has become savvier and they are demanding much more from the overall performance. Prior to the Technomad system, the main point was to work with what we had and make sure the people just heard SOMETHING.”

Simo concludes, “I honestly can’t think of a better loudspeaker for outdoor use. The Technomads sound excellent and can withstand any weather. Take it from me; we sure do have ‘any weather’ over here.”