Mr. Greg Dunn, Vice President of Wavelength Systems and Design, notes, “We have been designing permanently installed Technomad systems where the lids for the loudspeakers are easily accessible, so the loudspeakers can be quickly covered prior to wash down. The power and processing rack, which is the equipment that is most susceptible to the elements, is rolled out independently, and the technician just plugs into the Technomad’s jacks. These Technomad systems are usually going out on the fore, aft or pool deck entertainment areas. It’s also nice to get the Technomad loudspeakers in the white, as well as 13 other colored enclosures, which is a feature other manufacturers are not able, or unwilling, to provide in their weatherized speaker models.”

Technomad loudspeakers go into some of the harshest and abusive environments on a ship and, according to Mr. Dunn, “No one ever complains about them. We normally hear back about every piece of equipment we install on a ship, but we have to ask, ‘How are the Technomads holding up?’ and the answer is always, ‘they are working great.’ The comfort level with Technomad is definitely there.

Mr. Dunn continues, “Aside from the weatherization characteristics of a Technomad, if you look at the logistics of the Technomad cabinet construction alone, you can literally ship a Technomad without any packing material. So in terms of using them for ‘bang around’ outdoor, portable, on-deck systems, as well as permanently installed systems, I have never heard any negative comments.” 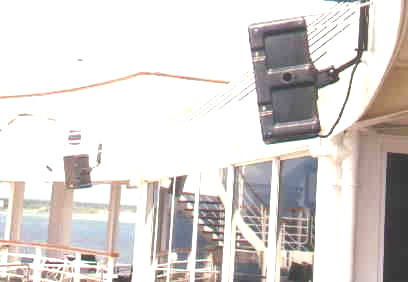 Transferring to the Cunard, Vista fjord, Mr. Warner comments on his second Technomad experience. “The Technomad system of four Nohos is sub-mixed from the disco, which overlooks the Vista fjord’s aft-deck. Our first test of Technomad system was for the Easter Morning Sunrise Service. I know not exactly a stunning way to show off the new loudspeakers, since all we were doing was standard vocal PA. But, the DJ and I gave the system a thorough test later that first day at sea. The DJ thought the Nohos were too small to cover the whole deck. Let me tell you, those little Technomads blew everyone away. He’s a believer now; you’ve got yourselves another satisfied customer.”

For more info about the services of C-Deck 731 (since he is never home) reach Derek Warner at [email protected].