BOSTON, July 27, 2010 – The city of Sturgis, South Dakota is known to motorcycle enthusiasts as home to one of the largest annual motorcycle rallies in the world.  Each year, hundreds of thousands of people flood Main Street in Sturgis and ride the breathtaking roads that connect the many towns of the picturesque Black Hills region.  The faithful will this year celebrate the 70th annual Sturgis Motorcycle Rally, taking place from August 9-15. 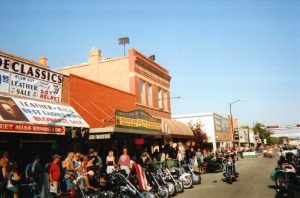 The first Sturgis Rally, known as the Black Hills Classic, was held on August 14, 1938 with a race of nine participants and a small audience.  The Rally has since grown into an event that has drawn nearly 13 million people since 1990, with another half-million expected to flood downtown Sturgis this year.  The full schedule of activities and entertainment this year includes burnout drag competitions, extreme motorcycle stunts, half-mile races and live concerts from bands and artists including Bob Dylan, Motley Crue, Alice in Chains and Disturbed.

With a loud and lively downtown population that will far exceed the usual Sturgis population of 6,442, the city requires a powerful public address system that can elevate clear, intelligible speech over the crowd noise.  The PA system features 16 Technomad weatherproof loudspeakers over a four-block area for outdoor public address and entertainment.  The loudspeakers are otherwise being used this summer to simulcast programming from a local radio station, and will remain in place for future downtown events.

Local broadcaster KNKL Radio will simulcast its live programming (1610 AM locally, http://www.theknuckle.com online) over the PA system and also handle announcements, providing music and information around the clock from its downtown professional broadcast studio at The Knuckle Saloon.  Pete Torino, owner and operator of KNKL Radio, works closely with the city to maintain and grow the PA system.  Torino first replaced existing 70-volt horns throughout the downtown area with indoor speakers that required constant maintenance.

“The frequency response on the horns was like fingernails on a chalkboard, and I lost several of the speakers due to rain,” said Torino.  “I grew tired of running up ladders to cover speakers with plastic sacks.  I started adding Technomad loudspeakers, and now cover a four-block area on both sides without trouble.  They sound great and have the sufficient SPL levels to overcome 100,000 roaring motorcycles downtown.”

The Technomad installation currently features eight Berlin and eight Noho loudspeakers as part of the multi-zone PA system.  Each zone features a mini-headend with rack-mounted amplifiers and EQ equipment.  The broadcast signal originates from the KNKL Radio studio, passing through a variety of signal processing and distribution equipment prior to reaching the local headends.

Torino controls the volume for each zone, often working with local police to raise or lower volume by zone upon request.  This allows him to take advantage of the clear speech and musical reproduction of Technomad loudspeakers at any volume to match the environment in each zone.

In between music and advertisements, Torino and other KNKL Radio broadcasters keep the crowd informed of events, local laws and traffic and weather while also using the system for general paging.  The station broadcasts KNKL Radio News at the top of the even hours, and a five-minute listing of Rally events on the odd hours.

“Last year, the emergency management team informed me of a big storm with 70-mile-an-hour winds and four-inch hail moving into the area, and that they were going to set off the city-wide sirens,” said Torino.  “The sirens would get the attention of the crowd but couldn’t explain the problem.  I used the PA to explain the weather situation, and the Technomads had plenty of power to overpower the noise and inform everyone in the downtown area.  The Technomads were able to act as both an entertainment and mass notification PA system.”

Meanwhile, KNKL Radio continues to expand its footprint, building a radio network that delivers its signal over the internet to motorcycle rallies, downtown areas and businesses in other South Dakota towns and cities.  The station also simulcasts on KDSJ-AM in Deadwood during the Sturgis Motorcycle Rally, expanding its over-the-air signal to five states.