When administrators of Hatboro-Horsham High School in suburban Philadelphia approached Omega Electronics about replacing their stadium P.A. system, they were looking for a substantial upgrade.  Their current system consisted of a pair of aging public address horns, plagued by unintelligible voice reproduction and low-fidelity musical output.  What they wanted instead was a system with the fidelity and response of a home audio setup.

“The days of using the plain old football field horns with a simple driver and limited frequency response are over,” said Joe Torquato, owner and president of Omega Electronics.  “Students and their parents are used to the quality their mp3 players, iPods and CD players deliver and expect the same quality from pre-show and halftime music.” 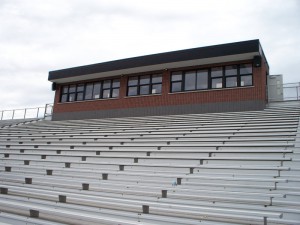 Torquato and his team set up the new system – a Technomad Turnkey PA System – in under four hours. They installed the Noho waterproof speakers on the press box façade following masonry work to smooth the textured brick surface for the mounts.  The weatherproof design of the loudspeakers mean that they can remain unprotected from the elements year-round.

“The new system allows for easy hookup of these devices,” said Torquato.”The Nohos provide plenty of high end; they also reproduce lows and mids very well, which is critical to high-quality musical output. The amount of power they put out covers the entire field. And the clarity of the voice is excellent.”

The Nohos are wired to a rolling signal processing rack inside the press box.  The Technomad Turnkey PA system rack comes complete with a pre-wired amplifier and a six-channel mixer with front-panel iPod/mp3 inputs, as well as a hard-wired microphone.

“Following the installation, the athletic director walked the entire field around the track and was amazed at the sound quality and coverage.”

This article originally appeared on the School CIO website. See original story at