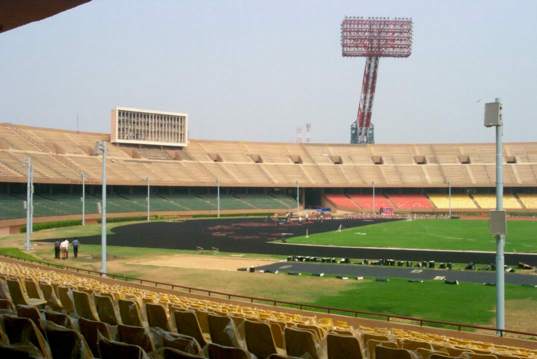 The Jawahar Lal Nehru Stadium in New Delhi, India was built by the Central Public Works Department (CPWD) of the Government of India in 1982. The massive facility is an all-purpose sports arena hosting football (soccer) and other sporting events, as well as large-scale entertainment events, such as concerts by India’s leading musical acts and entertainers. The facility seats 75,000 for football games, and as many as 100,000 for other athletic events, such as track and field, as well as concerts. Not only is the Jawahar Lal Nehru Stadium the home to leading sporting events, it also houses the headquarter offices of the Indian Olympic Committee. India hosted the first Asian Games in March 1951 in New Delhi and again the 8th Asian Games in 1982 when the Jawahar Lal Nehru Stadium was first constructed.

Established in 1990, Electrorama, with a staff of 25 full-time employees, specializes in all forms of sound, lighting and multimedia systems integration and installation projects for facilities such as theaters, stadiums, arenas, projection and Dolby surround sound systems for cinema, and other Government CPWD projects. Mr. Sunil Chauhan, a gentleman with over 25-years of systems integration experience and one of the directors of Electrorama states, “We don’t get hands-on involved in sound system rentals for concerts, although a good part of Electrorama’s business is renting sound and projection systems to other sound rental companies for concerts or corporate events. New build and retrofit system integration projects are where the profits are and these jobs make-up the bulk of Electrorama’s business.” 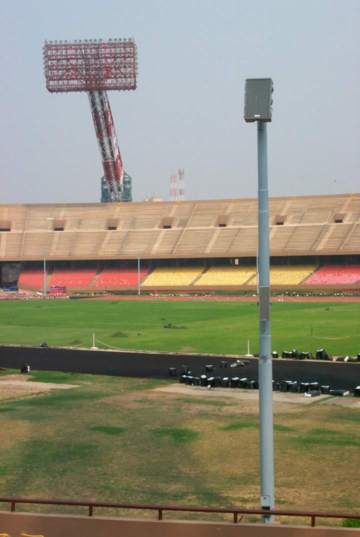 Electrorama’s redesign work for the Jawahar Lal Nehru Stadium’s new sound system began in early 2001 and plans were provided to the CPWD in the late spring of the same year. Work began in July 2001 and the project was completed in late October 2001. The sound system design criteria called for a dual-purpose sound system that could provide wide-dispersion, high-intelligibility speech-only output for sporting events and also be used as a high fidelity, full-range delay system for concert events.

“Plus,” Sunil points out, “Long-throw (High-Q) stadium loudspeakers have such a tight dispersion pattern that in order to effectively cover the large seating areas we needed to address, we would have had to mount as many as six loudspeakers per pole, per seating section, for as many as twelve loudspeakers per pole. This would have resulted in large loud speaker clusters that would have compromised the sightline criteria of the project and sent the system price soaring.”

To add to the design complexity, the system also had to be a 70 volt system since the cable runs from the equipment rack rooms to the loudspeakers ranged from 200 meters for the shortest cable run to longest being 300 meters.

with water during the first heavy rain. Combined with the beam-like output, obstructive size and unsightly appearance of such a speaker, Electrorama’s design team selected a loudspeaker that met and exceeded the strict design criteria for the project. Technomad Transformer version loudspeakers were chosen as the front-end of the system.

Having used Technomad Vernal 15T loudspeakers in a previous smaller installation, as part of a distributed system upgrade in India’s National Stadium, Sunil and the Electrorama engineers were familiar with Technomad’s output, clarity, low profile and durability. “We had competition in this project from Bose, JBL, Community R2, EAW, and Philips,” stated Sunil. “But the Technomads, the smallest loudspeakers we’ve found, featured the overall best output and durability specs, including a US Military Specification (Mil-Spec 810F) that no other product could touch. In this project, the Government of India is the client and to my Government there is no better endorsement or feature/benefit than a US Government Military Specification for product durability. Once the client was aware of the Mil-Spec, combined with our successful experience with the Technomad product, the client’s mind was put at ease very quickly and they were sold on the product.”

New Delhi’s leading sound design and installation firm, Electrorama, was contracted by the CPWD in mid-2001 to design a new all weather, high fidelity, wide dispersion sound system for the Afro-Asian Games, which were to be held in New Delhi, November 3 – 11, 2001.Sportspersons from 96 countries, representing over two-thirds of the world’s population, were to take part in the games representing six disciplines – athletics, boxing, football (soccer), swimming, shooting and tennis. Athletics and football were to be held at the Jawahar Lal Nehru stadium, tennis at the R. K. Khanna Stadium, swimming at the Talkatora pool, boxing at the Indira Gandhi Indoor Stadium, and shooting at Dr. KarniSingh Stadium. Regrettably, recent international tensions have led to the postponement of the Afro-Asian games, but other events still take place in the Jawahar Lal Nehru stadium on a regular basis. The sound system was only part of the massive upgrade to the stadium that also involved installation of thousands of new seats, a complete track and field resurfacing and upgrade and other improvements to concessions, as well as electrical, security and plumbing systems. 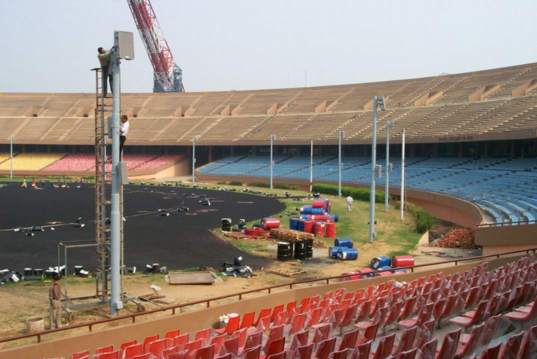 Not known for being particularly sparing on loudspeakers, New Delhi’s climate ranges from stifling humidity and 90 to over 100 degree temperatures in the summers, a two-month rainy season in the spring and fall, and temperatures in the low 40s and 50-degree ranges during the winter months. The previous sound system had survived India’s radical client conditions for nineteen years, not without frequent repairs, since it was first installed when the stadium was constructed in 1982. Not only did the Government of India want pristine sound for the Inaugural Afro-Asian Games, the most prestigious games ever to be held in the stadium or hosted by the city of New Delhi, the CPWD wanted to get twice the life span, increased output and fidelity from the new sound system, as well as reduce the frequency of the repairs. 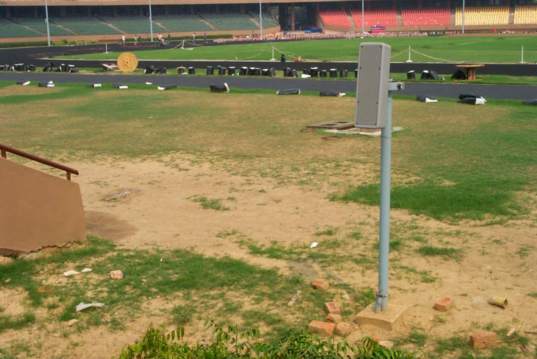 The sound system had to be physically very low profile so not to obstruct sight-lines of lower-level seating, as the loudspeakers are mounted on a series of twenty-five existing 8.5-meter high steel poles that are evenly distributed around the perimeter of the playing field. Every seat in the stadium is open to the environment, as the structure has no overhanging roof of any kind over the seating areas. Therefore, there are no additional places from where to support or suspend a fold-back delay sound system. Part of the criteria even stated that the near and mid-field loudspeakers could be no wider then the mounting poles themselves.

All other long-throw speaker cabinets that were researched proved to be way too large for the restrictive sightline obstruction criterion that was written into the spec. These loudspeakers also simply did not have the combined long-throw and wide dispersion characteristics required to evenly cover all the seating areas from only twenty-five speaker-mounting poles. 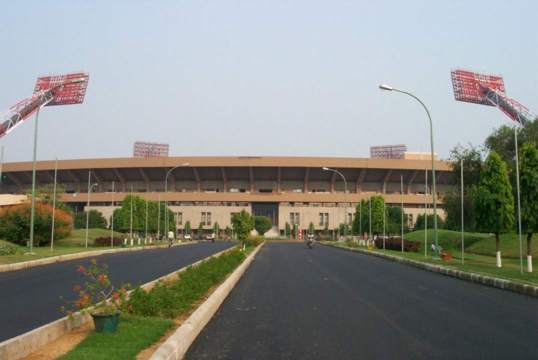 The long-throw stadium loudspeakers that were investigated also lacked fidelity characteristics that could make them good candidates for a concert delay ring, as well as a speech-only system. Overall, other loudspeakers proved to be far too beamy to the point that their output would be too harsh on those attendees seated closer to the action and seats farther in the back sections would be hit with an abrupt mid-rangy output with the high-fidelity characteristics of an AM radio.

“It’s a very clean-looking installation,” states Sunil. “At only 21-inches wide, the Berlin 15T is only about 12-inches wider than the pole to which it is mounted. The Berlin 15T and the Paris 616T were also custom ordered in a gray cabinet color to match them to the color of the galvanized mounting poles. So, for the most part, the vertically mounted Paris 616T, which is no wider than the mounting pole, is almost imperceptible, especially at night.” 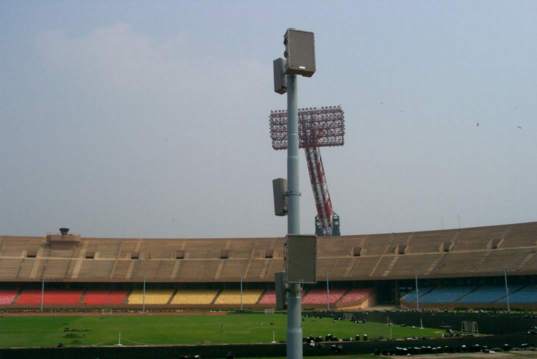 Sunil states, “When the job was cut back to only six Paris loudspeakers for playing field coverage, we knew the players would not be able to hear the game calls as well as the audience, if they heard anything at all. After the first game, we received a call from the CPDW requesting that the original ten Berlin 15Tfield coverage loudspeakers and Crown amps be added back into the sound system and that addition has recently been completed.”

Four engineers, two supervisors, eight technicians/wire men, and one welder were involved in this specific project from its beginning. While the project, on paper, appeared like a simple enough jobs to install, reality proved to be quite different. Pulling approximately 32 kilometers of cable took up a substantial portion of the two-month installation time and several days of heavy weather hampered workers from welding speaker brackets into place, thereby delaying the installation of the loudspeakers. Sunil jokes, “Yes, the Technomad loudspeakers are weather resistant, but workers on an 8.5 meter high pole are not resistant to lighting.”

Sunil points out, “The Technomad Berlin 15T is very efficient, but also delivery coverage is very uniform both vertically and horizontally. The Berlin 15T’s two-inch compression driver is mounted to a 120×120 degree horn, so with a wide coverage output, we hit a complete seating section with only one speaker. The output of each Berlin 15T is slightly overlapping the output of the Berlin speaker next to it to eliminate dead spots. The way the Berlin 15T’s are mounted, the lower horizontal cutoff is right at the front edge of the upper section balcony and then just above the last row of the upper section. The Berlin 15T has a very wide efficient and effective output that eliminates the need for more loudspeakers then is really necessary.” 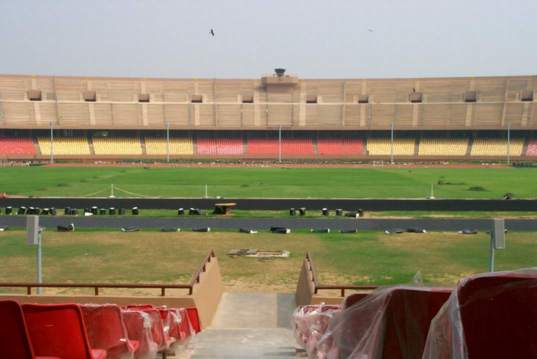 Continuing, Sunil states, “Physically, the Berlin 15T’s driver configuration is correctly designed for its very shallow cabinet. The 2-inch compression driver and 15-inch bass transducer are physically time-aligned in the 11-inch deep cabinet, so 48 meters out from the face of the speaker the spectator is getting the Berlin 15T’s low-end 50 Hz and 17.5 kHz high-end output just as accurately as the guy in the front row of the upper section, who is 25 meters closer to the cabinet. We have yet to find another speaker that can put such an even full-range sound on a crowd. The low-frequency response was excellent, especially when you consider that this is a transformer-driver/70-volt system. Technomad’s high-end 70-volts approach worked very well for us.”

The Paris 616T, also with a 120×120 degree output from its 1-inch compression driver and twin 6.5-inch bass transducers also provides even and accurate coverage for the first level and VIP seating areas. The dispersion cut-off of the Paris 616Tis aimed right above the last row of the first section to avoid reverberation in upper section overhang area.

“For the tight requirements of the job spec,” states Sunil, “The Technomad loudspeakers worked out perfectly. Once you start with a quality sounding and constructed loudspeaker that is designed right, designing the entire system backwards from the speaker is that much easier. A processed sound system, which was proposed by other companies, drove the costs up exponentially, thereby knocking them out of the running. By using such a good speaker, we’ve eliminated a lot of unnecessary processing from the signal chain and reduced the system cost and complexity while still delivering an expensive sounding result 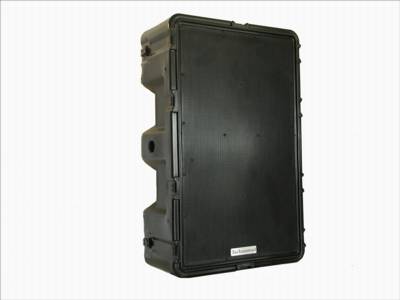 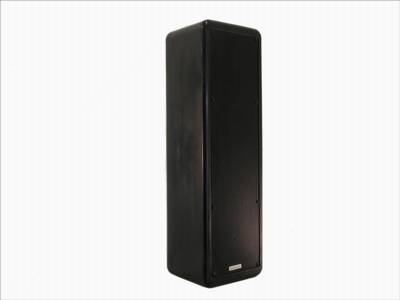