Mt. Snow, located in beautiful West Dover, VT, is one of the premier ski areas on the East Coast. This past winter, they held one of their premiere events, The Bud Light Anti- Gravity Grail, and Technomad loudspeakers played an important part in the weekend’s activities. Right before the event, Mother Nature dumped 9 inches of snow onto the mountain, although no one in attendance seemed to mind. As always, the park crew and cat drivers dealt with the weather, and the pipe competition went off without a hitch. The folks at Mt. Snow “amped” up the proceedings a little more by combining the Grail and another event, The Mega Mother Hucker, into one action-packed weekend. In the middle of all this weather and competition was Technomad Berlin 15/H loudspeakers, used by the rock group Livintrust to provide entertainment to the sizable crowd assembled for the events. Based out of New Haven, CT and playing in clubs from NYC to Boston, Livintrust is an up and coming act with international success on their minds. Great songs and stage show made this group a standout, and the Technomad Berlin 15/H loudspeakers did a fantastic job of rocking the sizable crowd, despite the cold and changing weather conditions. Skiers and snowboarders alike were heard to remark they had never heard a live band sound as good as Livintrust sounded that weekend, thanks to the Technomad Berlin 15/H loudspeakers. Reference Links: 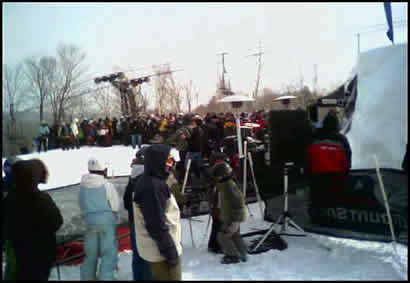 Spectators watch the band at Mt. Snow, a Technomad Berlin 15/H loudspeaker on a stand visible in the right foreground 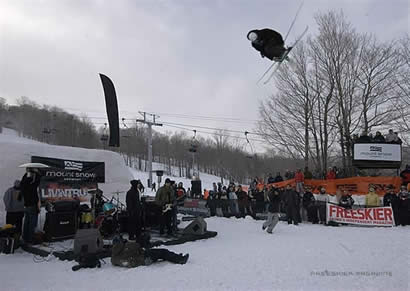 » Berlin 15/H Loudspeakers
» Why are Technomads so Weatherproof?
» How Technomads Are Made
» Customer Comments