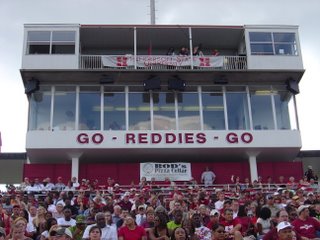 The university purchased six Technomad Berlin 15/H Install loudspeakers and two Technomad Paris 616 loudspeakers. It also purchased two PA racks filled with new mixers, amplifiers, signal processors and other equipment. Four of the Berlin 15/H Install loudspeakers are installed on the press box above the home bleachers, with the other two on poles next to the visitor bleachers. The Paris 616 loudspeakers are installed lengthwise on the ceiling of the press box overhang to provide a direct audio source to the expensive alumni seats underneath. Henderson State University purchased all the equipment and products through Troxell Communications.

The Technomad Berlin and Paris loudspeakers blend exceptionally well, to the point that it sounds like one enormous loudspeaker covering the entire stadium, said Jim Wilhelm, multimedia specialist for Henderson State University. We positioned the four Berlins on the press box so the middle two are pointing straight ahead and the far left and right loudspeakers are at a 45-degree angle. I wanted to ensure that those seated in the far upper corners are hearing the same quality as those at dead center. And, while the Berlins are still audible from under the press box, the Paris loudspeakers provide a more personal audio source for the alumni who pay for those seats.

This story initially appeared in the February 18 issue of Sound & Communications.