BOSTON, December 3, 2007 Technomad Associates, LLC, a leader in weatherproof outdoor loudspeakers and PA systems, today announced that the ABC-TV Extreme Makeover: Home Edition team has completed installation of a Technomad Turnkey PA System at the University of Louisville in Kentucky.

Technomad donated the system, featuring two weatherproof outdoor loudspeakers and a complete PA rack to power the loudspeakers, to the popular ABC series last week for a two-hour special scheduled to air in February 2008.

On November 7, Patricia and Patrick John Hughes family of Louisville, Kentucky, received word that Ty Pennington and the Extreme Makeover: Home Edition team would renovate their home into a safer and more accessible home for their blind and disabled son, Patrick Henry, age 19. The storyline also includes the renovation of a practice field at University of Louisville, where Patrick Henry marches in the University of Louisville School of Music Marching and Pep Band, maneuvering his wheelchair through the formations with assistance from his father. 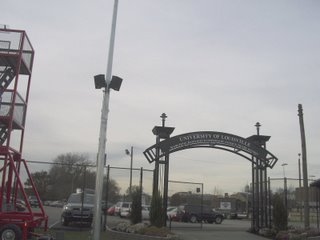 Technomad delivered the system for installation by Super Home Systems of Louisville in the week following the Hughes family receiving the news. According to Phil Deddens, President of Super Home Systems, the system was easily set up in one day, requiring only simple cable runs and electrical connections. The University of Louisville’s practice field is the size and shape of a football field. Deddens and his team installed the two Technomad Noho C loudspeakers on a new light pole at the 50 yard line, each at opposite 45 degree angles to optimize audio coverage on the field.

The Technomad loudspeakers cover the field very well, and the complete PA system is an enormous improvement over the handheld megaphone that the band director had previously relied on, said Deddens. The show director was using the system to stage the band and the spectators prior to the reveal to the Hughes family, and the audio came through loud and clear.

The Technomad Noho C loudspeakers are installed nearby the tower where the band director gives his commands, allowing his voice to project out onto the practice field and reach the 220+ members as they are playing and practicing their formations. The PA rack, featuring an amplifier and six-channel mixer, is housed in this tower, close enough to allow a 20-foot microphone cable to easily reach the mixer input. The Turnkey PA system includes a microphone for the band director, loudspeaker brackets, and cables to connect all the components.

Patrick Henry and the entire University of Louisville School of Music Marching and Pep Band will benefit from the overall rebuild and retrofit of the practice field, said Diane Korman, Senior Producer for Extreme Makeover: Home Edition. Prior to this renovation, the band did not have a suitable place to practice their formations. While the home renovation is certainly the most important aspect, the practice field renovation with the Technomad donation is an essential chapter in a very uplifting story.

“Extreme Makeover: Home Edition,” which has won back-to-back Emmy Awards as Best Reality Program (non-competitive), is in its 5th season on ABC. The program is produced by Endemol USA, a division of Endemol Holding. Denise Cramsey is the executive producer; and David Goldberg is the president of Endemol USA.